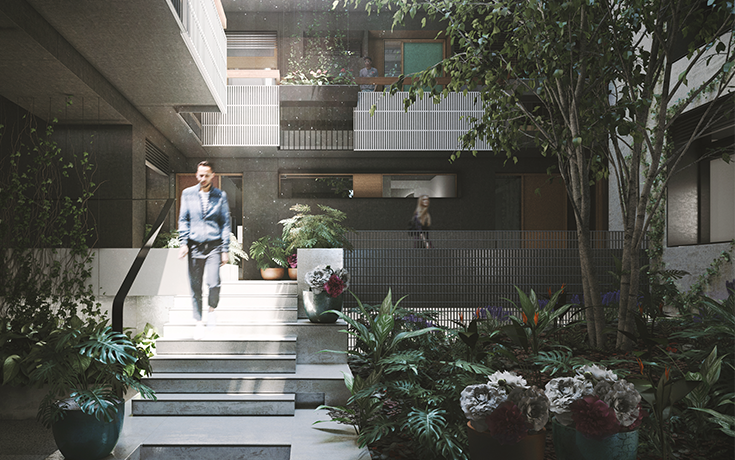 A new tranche of 30 apartments went up for grabs at Nightingale Village, with buyers invited to ballot for their preferred apartment by Thursday 14 March.

Given that the first building offered in the village, Skye House by Breathe Architecture, received 150 ballots for the 28 available apartments, Hayball’s offering CRT+YRD, could expect to be well received.

About Nightingale and Hayball

Nightingale Village is an ambitious and unusual development in Brunswick, Melbourne, which is based on a variety of social, financial and environmental principles determined by the non-profit organisation, Nightingale Housing.

The village involves seven buildings in a single precinct each designed by a difference architecture practice and led by Breathe Architecture, whose founder, Jeremy McLeod is the brains behind the Nightingale Model.

Hayball’s involvement in Nightingale Village is notable. The Nightingale model excludes developers and real estate agents, which in turn lowers the prices for buyers. But Australian architects typically don’t like to put developers off-side – they are their clients, after all. It’s interesting to note that Hayball, one of Australia’s largest practices with 180 staff in Melbourne, Sydney and Brisbane, is willing to take the risk.

Hayball is the second practice to ballot its building. Nine of the 39 apartments in Hayball’s building, CRT+YRD, are preallocated, with seven of these going to community housing partners, Housing Choices Australia and Women’s Property Initiative (WPI), subject to funding. Two apartments are pre-allocated for Hayball’s staff members.

Courtyard design brings light to all

As the name suggests, a central courtyard from the ground floor to rooftop offers a lightwell and cross ventilation throughout the environmentally sophisticated building. Most levels have six single-level apartments, but the ground and roof-top levels each feature four double-storey townhouses.

The rooftop finishes the building spectacularly with the townhouses backing onto communal rooftop facilities such as laundry, gathering zones, and communal planters. Two of the roof-top apartments are one-bedroom and priced at $590,000 and two are three-bedroom going for $940,000 and $945,000.

Overall, the indicative prices for CRT+YRD are higher than Breathe Architecture’s Skye House, with the cheapest, a south-facing 30-square-metre micro-apartment (Teilhaus), priced at $292,500 or $9,599 per square meter, compared to Skye House’s cheapest Teilhaus at $215,000 or  $7586 per square meter.

While Skye House offered the cache of living in the same building as Jeremy McLeod, the co-founder (with Tamara Veltre) of Nightingale Housing and Breathe Architecture, Hayball can draw on its enormous bank of loyal clients who can afford the extra and will pay for Hayball name.

As a measure of its power to pull well-heeled clients, CRT+YRD features three three-bedroom apartments (Skye House has one and it was pre-allocated to Mcleod).

CRT+YRD offers four Teilhaus micro-apartments (all facing south): seven one-bedders, five with a study nook; and 16 two-bedroom apartments offering a range of special features, such as nooks and big balconies.

You can find all the information to choose your apartment and enter the ballot at Nightingale’s website and Hayball’s website.