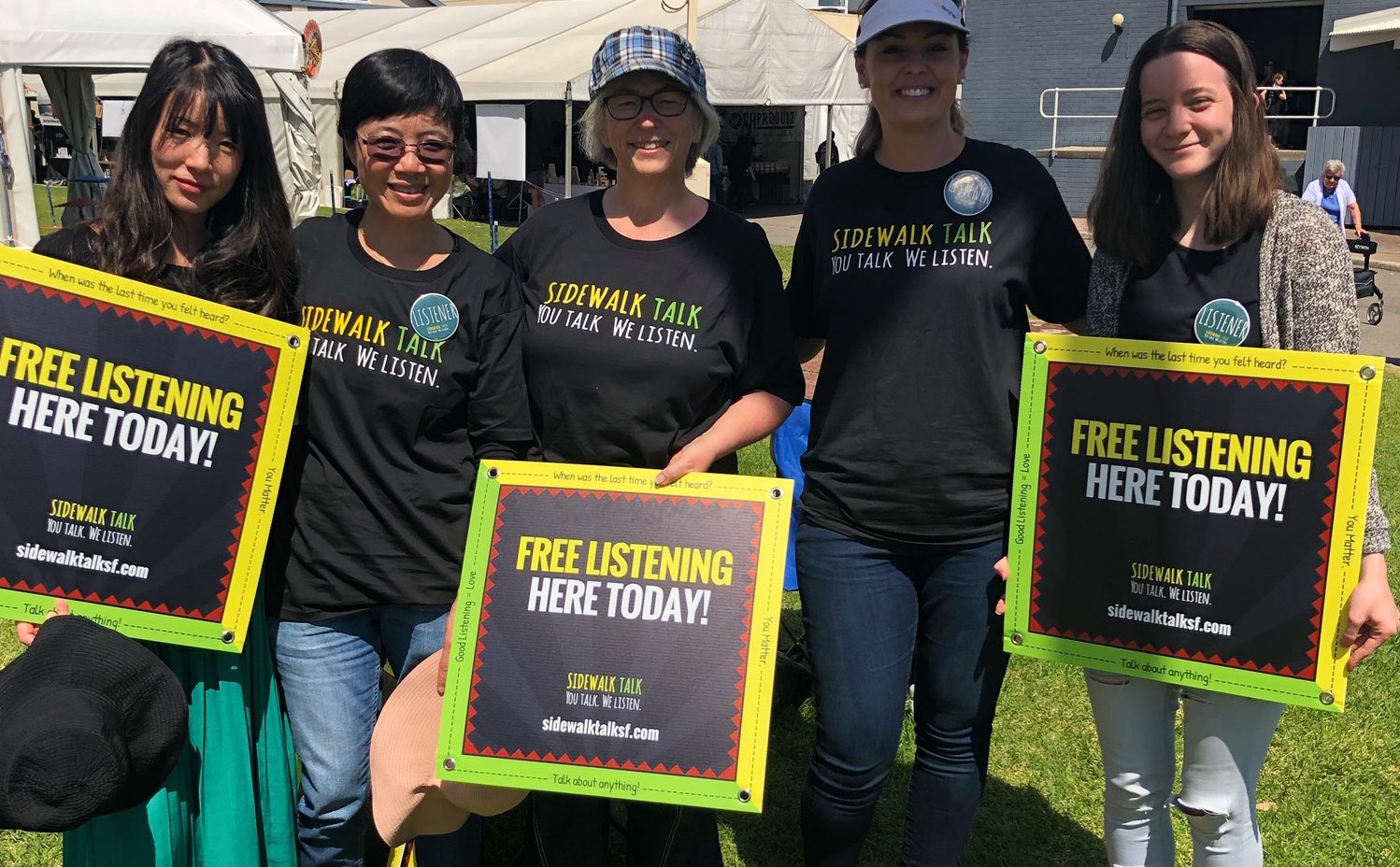 Two chairs and a sign: FREE Listening Here. With this simple design, a global movement is born and arrives in Australia: Sidewalk Talk.

Sidewalk Talk, a global movement of volunteer listeners, started in San Francisco in the autumn of 2014 when two therapists wondered if listening could “heal the divide” between people. Traci Ruble, co-founder and director of Sidewalk Talk, tells Dream Planet: “We are seemingly less able to feel both connected and different. In psychology, this is a psychological impediment or defence called splitting. We engage more and more in this behaviour.”

We need a way to hear the stories of people who are really different to us. Traci ruble 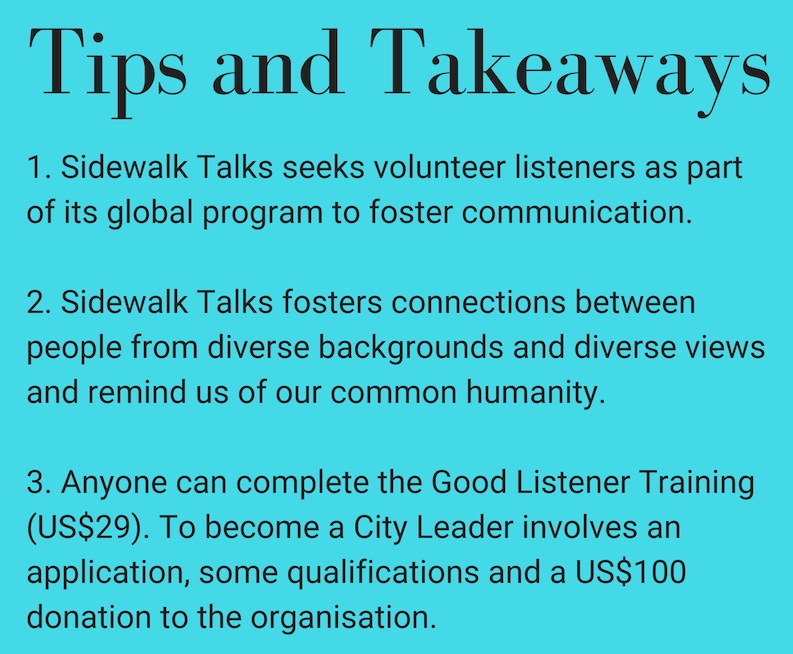 In May 2015, Ruble and 26 fellow therapists set up in 12 locations across their city and sat listening, for two hours to anyone who stopped.

“Our unique differences can feel like a source of vitality, learning, and intrigue or it can be felt as a source of threat and exclusion. We jump to black-and-white, all-or-nothing thinking more readily than ever before. When we listen, we heal those splits, between people and sometimes inside of our own selves,” Ruble says.

Today, Sidewalk Talk are happening in 40 cities across 12 countries, including Australian chapters in Sydney, Melbourne and in Queensland on Gold Coast and Sunshine Coast.

Perth City Leader, Laura Benger, held her first Sidewalk Talk event at the Perth Royal Show in October this year. She heard about Sidewalk Talk on a podcast last year (Jonathan Fields, The Good Life Project). “An interview with Traci popped up. It gave me goosebumps and resonates with the way I see the world,” Benger says.

Curious passers-by stopped to watch Benger’s team of seven listening volunteers as they silently set up their chairs and signs on a grassy corner. Three teenagers walked past, stopped, turned and looked. “They were dressed for horse event, two boys and a girl, 16 or 17,” Benger says. “The young girl ran over and sat down, then one of the boys. Then the other one, who was playing on his phone, thought, ‘What the hell!’ Peer pressure at its finest.”

When a four-year-old boy with a donut sat down in the chair opposite Benger to eat his sticky prize, his mother, a woman in her early 20s, hurried over, apologising. But as Benger explained the idea, the young woman started talking. She said she sometimes does not speak to anyone apart from her son all day. “I bought him here to get out of the house,” the mother explained. The conversation between Benger and the boy’s mother continued for the next 10 minutes.

Benger felt moved. “It is really sad that people can go all day without someone to speak to. I asked her, ‘How did it feel to be listened to today?’ She said, ‘It felt really great; such a relief and thank you!’ She left with a big smile on her face.”

She said, ‘It felt really great; such a relief and thank you!’

For the next two hours, the volunteers invited visitors to the show if they would like to be listened to. Many were curious and most loved the idea. A few sat down for the experience. It might seem a little awkward, but Benger says the moment the conversation starts, everything flows naturally.

She found the experience exhilarating. She had organised the event spontaneously, approaching the Show organisers for permission, then inviting volunteers on Eventbrite. All listeners completed The Good Listener Training (US$29) (which is mandatory) before participating in the event.

For their own safety and those participating, there are rules. Always work in pairs. How to respond when you feel uncomfortable about what is said. Protocols for handling participants who express suicidal thoughts. Precautions. Mostly, both listeners and talker are uplifted by the experience.

The power of listening

Nevena Krups, a City Leader for Sidewalk Talk in Sydney, arrived in Australia with her husband seven years ago. For two and a half years, she wasn’t allowed to work because of visa problems. Originally from Croatia, and fluent in writing and reading English, she was less confident about speaking the language. Isolated by language for the second time in her life, Krups had to depend on her listening skills. “I am very familiar with the power of listening,” she says. “I am from Croatia and was a refugee when I was nine. We fled to Germany during the [Yugolsav] wars. From an early age, I listened closely to learn the new language and translate for my parents. It was always important to listen well to avoid confusion and not make mistakes.”

“I am very familiar with the power of listening.” Nevena Krups

After seeing a video about Sidewalk Talk, she had a long talk with a friend about her listening skills and decided to get involved. “I didn’t know if I would be qualified,” Krups says. But Krups found she had what it takes: professional qualification in mental health (or related fields), a willingness to be trained, to follow the code of conduct, and pay a US$100 donation.

At the end of September this year, Krups and three volunteer listeners set up their chairs and signs on Manly Beach on Sydney’s North Shore, with the approval of the local council. “They encourage us to make our own signs because handmade signs are more appealing. I wrote, Recipe for human connection: an open heart, open mind and undivided attention. All available here today.”

It rained. The first hour, the team wandered through the beach-goers asking if they would like to be listened to. “I was surprised that the most common response was, ‘I don’t have anything to say’. I was stunned, but I found my way around it. I invited people to just sit down and feel what it is like to be listened to. ‘Just talk about your day’.”

In conversation, the role of listener and speaker moves back and forth. Krups explains. “Someone says something and you say, ‘I did the same thing’ and the attention moves back to you. With active listening, I am listening to you and it is all about you. I and my responses are not as important.”

With active listening, I am listening to you and it is all about you.

But Krups says listeners are authentic in their responses. “If you feel triggered by something, you don’t have to push through. You can express that feeling. You might say, ‘This is making me a bit uncomfortable’ or ‘I’m not sure how to respond to that’. It is about honesty, not to reveal anything personal, but to stay true to yourself and, at the same time, honouring the person you are listening to.”