Of course, I am not going to run over a pedestrian on my electric bike! Well, I hope not anyway. Mind you, they look so fiercely determined as they march along the designated bike lane on Bourke Street towards Southern Cross station. And they don’t get out of my way as I ride on the small sliver of the road (far narrower than the footpath) that is designated for me to cycle in safety.

I mean the other kind of “run down”: the put-down

No, I mean the other kind of “run down”: the put-down, criticism or lecture. I am not going to tell pedestrians they are in the wrong. I might be tempted. After all, pedestrians get pretty cross with me if I ride on their footpath. But I am not going to run them or their attitudes down for one excellent reason.

Cyclists and pedestrians must stick together if we are ever going to reclaim our fair share of the road.

Wide as it is, the footpath on Bourke Street is not wide enough for all the commuters walking to catch their trains of an evening. Obviously, if pedestrians take to the middle of the road, displacing the cars, things are not going to end well. So they stare down the cyclists and walk along the bike path.

Most cyclists won’t feel entitled to run them over (as a driver might). Most cyclists, unlike many drivers, will share the road. Some car drivers would be enraged at the mere idea.

Shared pathways don’t work. Pedestrians need their own routes to travel safely. Some cyclists want to go fast, and they are entitled to do so. Some walkers wobble about on a path, and they are also entitled.

One way that the road authorities reduce the real estate available to cyclists and pedestrians is to force us to share pathways. This practice is so widespread that we take it for granted. Indeed, it pedestrians in Bourke Street may assume they are allowed on the bike paths because of this customer.

No, every time I see a pedestrian claiming the bike path as a footpath I remind myself that we are kin. Neither they nor I get our fair share of the road network. In fact, pedestrians have even less representation and political clout than cyclists! Children and our elders are the most likely to walk our cities, and one of the best pedestrian advocacy groups in our nation, Victoria Walks, operates on a shoestring (an apt metaphor in this case). We must stop fighting each other and start reclaiming our roads from the drivers.

Instead of running down pedestrians, I pledge to sign up to the Victoria Walks newsletter (done) and the International Federation of Pedestrians and become a supporter by making a donation. I will benefit if they succeed.

Walkers and cyclists alike will benefit if we join each other’s advocacy groups.

Will you join me in the dream? 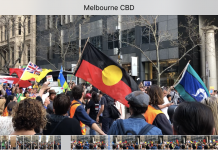